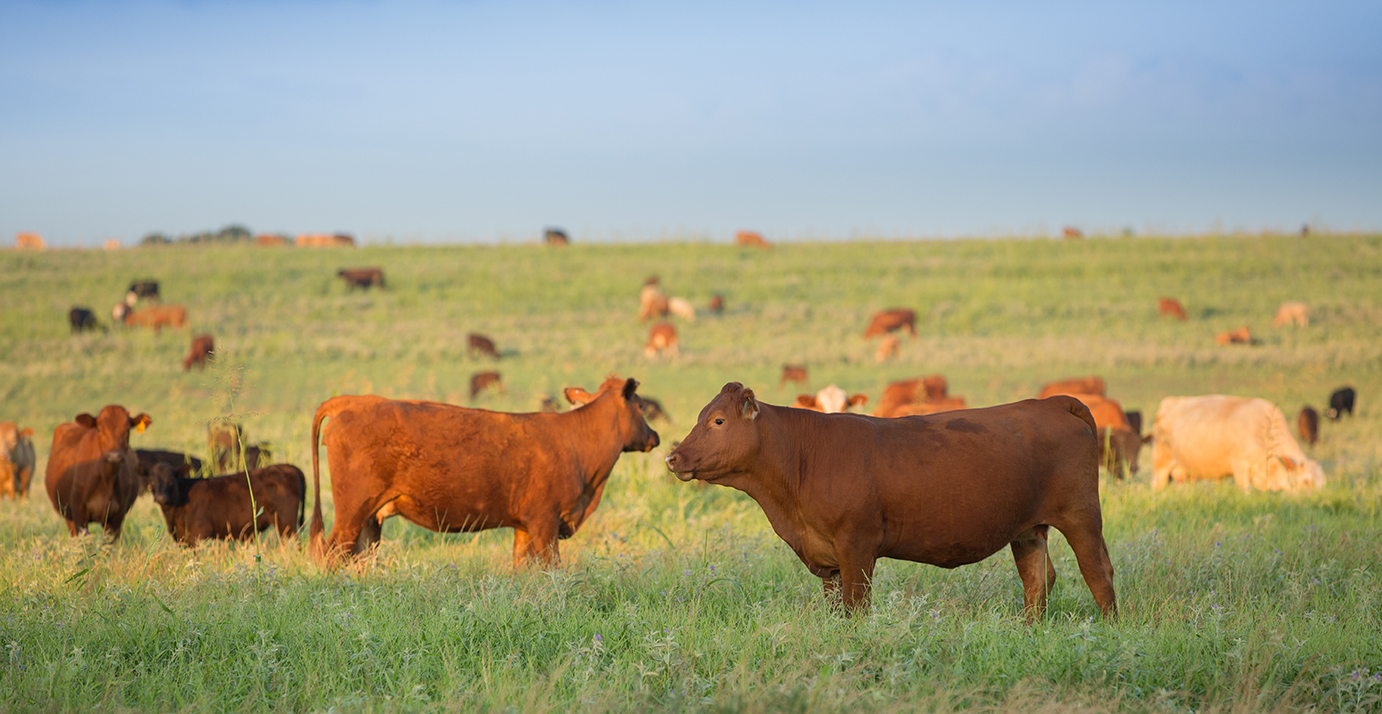 Cattle grazing in pasture on ranch

Tall fescue forage is generally of high quality and digestibility. The species is nutritionally similar to other cool-season perennial grasses when grazed or harvested at a similar stage of growth. Historically, fescue hay is harvested when too mature, resulting in lower energy and protein content with poor digestibility. Additional protein, energy and mineral supplementation is usually needed when forage quality is low. Fescue stores plant sugars and other nutrients during the fall and early winter months. This can be a benefit for fall calving cow herds, which have high nutrient requirements during those months.

The nutritive value of fescue forage is directly related to its stage of maturity when grazed or harvested for hay. In general, the protein, energy and major mineral like calcium and phosphorus are adequate to meet the needs of most classes of beef cattle. Two forage surveys conducted by the National Animal Health Monitoring System, a division of the USDA-APIS, showed that compared to the mineral requirements of mature beef cows, 65-75% of the fescue samples analyzed were marginal to deficient in the important trace mineral copper, while over 85% of the samples were marginal to deficient in Zinc and more than 95% of the samples were marginal to deficient in selenium. All of these trace minerals are essential for adequate immune function, reproduction and growth. Proper mineral supplementation is necessary in order to supply these important mineral nutrients and maintain cattle health and performance.

Although fescue is a reasonably good quality forage, cattlemen have experienced health and production problems when grazing fescue pastures or feeding fescue hay. Many fescue varieties, such as Ky-31, are infected with an endophyte fungus that lives in the plant. The endophyte helps make the grass resistant to drought, insects and diseases and it can also withstand heavy grazing. However, grazing these endophyte-infected fescue pastures or feeding endophyte infected fescue hay can lead to a host of negative health and performance issues in cattle. The endophyte causes blood vessels to constrict, thus limiting blood supply to the body especially the extremities like the tail and feet causing a gangrenous condition called “Fescue Foot”. A narrowing of the blood vessels also results in reduced prolactin levels, lower conception rates and poor milk production in cows. Visually, cattle typically show signs of heat stress. Affected cattle often have increased body temperature, a dull, rough appearance and fail to shed off their winter hair coat. They avoid grazing on hot days and seek out shade, ponds or mud as a means to find relief from the heat. The result is lower feed intake, lower body condition in cows and reduced growth rate in calves.

Managing cattle grazing endophyte infected pastures may not eliminate the endophyte toxicity, but it may help reduce the severity of the symptoms. Removing cattle from fescue pastures during the hot summer months may reduce the symptoms heat stress often seen in cattle on fescue pastures. Moving cattle to a warm-season pasture during the heat of the summer may improve cattle performance. There are numerous methods of limiting the toxicity effects of endophyte infected pastures through various forms of supplementation. Providing supplemental hay or a grain/protein-type supplement may help alleviate some of the negative effects of the endophyte by diluting the infected fescue. It has been a common practice to clip or mow the fescue in order to remove the seed heads, which were thought to contain high concentrations of the endophyte toxins. Recent research however, showed that the bottom two inches of the plant is actually the most toxic part of endophyte infected fescue, so it is also important to leave a 3-inch stubble after grazing or clipping. Producers should identify the risks with each of their pastures and take steps to mitigate these risks before herd performance is negatively affected during the summer.

Mineral supplementation is an important part of any beef cattle nutrition program. This is especially true for cattle grazing fescue pastures or fed fescue hay. Not only is fescue marginally deficient in several important trace minerals including copper, selenium and zinc, but the reduced intake of endophyte infected fescue further reduces the animal’s total mineral intake. Selenium, zinc, copper and magnesium are the most important trace minerals required by cattle grazing endophyte infected tall fescue. These trace minerals are necessary for maintaining proper immune function, which becomes compromised in cattle grazing endophyte infected tall fescue. Zinc and copper have been shown to have a binding effect on the harmful toxins produced by the endophyte. Copper supplementation must also be considered as endophyte-infected tall fescue contains lower copper levels than endophyte-free tall fescue. Copper deficiency symptoms such as rough coats, reduced conception rates and hoof problems can be exacerbated by endophyte infected tall fescue as the endophyte also decreases the bioavailability of copper to the animal. Feeding a properly fortified and balanced mineral supplement with the correct levels of Copper, Manganese, Selenium and Zinc can help to overcome this low mineral intake and alleviate some of the fescue’s toxicity.

The unique formula for Fescue Mineral includes Yeast Culture to stabilize the rumen and enhance nutrient utilization, a clay binder to help mitigate mycotoxins in the feed, and natural and artificial flavors to enhance palatabuility.

Garlic – A Natural Insect Repellant for Beef Cattle on Pasture External parasites including flies & ticks can negatively affect cattle health and performance. They are the primary vector of numerous diseases including Anaplasmosis. Controlling these pests can be time consuming and costly. An effective and inexpensive tool for reducing the impact of flies & ticks is available from Western Feed Mills, Inc. GARLIC! Research with beef cattle showed that feeding garlic significantly reduced the number of ticks on both the body and ears. Reducing the level of fly and tick infestation can not only reduce the risk for insect-borne diseases, but it can also improve cattle performance including body condition, milk production and weight gain.

For more information about our Western Feed Mills cattle minerals, please visit our Cow Minerals or Stocker Cow Minerals pages. You can also call us at (620) 758-2283.