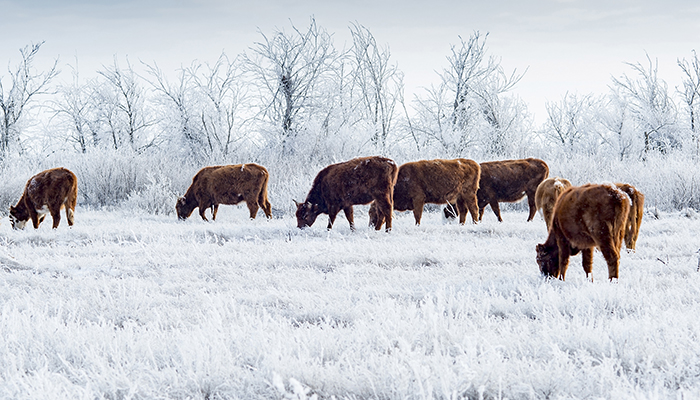 A herd of cows in the Kalmyk steppe in the winter. All vegetation covered with a thick layer of frost.

Supplementing protein to cows on winter range has long been an accepted practice. But the real value might surprise you!

WHY IS PROTEIN SUPPLEMENTATION SO IMPORTANT?

Numerous University research studies have shown that supplementing beef cows with protein results in improved body condition scores, improved reproductive performance and heavier weaning weights. Research at the University of Nebraska West Central Research and Extension Center also demonstrated that protein supplementation of spring calving cows grazing winter range resulted in greater pre-calving cow body weight, higher calf birth weight and a higher percentage of cows calving during the first 21 days of the calving season. The biggest effect of protein supplementation however, was seen in the performance of the calves. Dr. Rick Funston of the University of Nebraska uses the term “Fetal Programming” to describe the concept that the nutrient status of gestating cows may have various far reaching implications on their offspring, even before they are born.